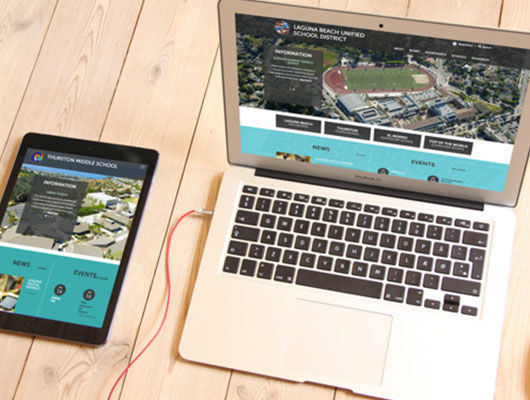 Laguna Beach Unified School District in California is a well-funded school district with dozens of accolades to boast.

Their most recent: In a letter to California Superintendents, Laguna Beach USD was named as one of three districts to watch as an example of a "leading digital district" by Tom Torlakson, the State Superintendent, stating that LBUSD is a "bright spot serving as a light of encouragement and guidance for our state."

Now being in the top three districts in one of the most populous and competitive states in the country is something to brag about. So of course, when we got wind of that sentiment, we had to reach out — especially since their website just won an award this summer.

(Their accolades just keep building, am I right?)

So I caught up with the brains behind the digital initiative at LBUSD — District Teacher and Web/Media Specialist Andy Crisp and Chief Technology Officer Mike Morrison — to learn how such an accomplished district shares this incredible story in their digital marketing efforts.

As it turns out, before redesigning with Finalsite, their website with Schoolwires didn't quite get that impressive story across.

LBUSD Superintendent, Sherine Smith realized that the web page was a critical means of communication to the students and parents and wanted something greater. "We had the full support of the superintendent to not only pick the best company but also pay for whatever was needed for ongoing maintenance."

With this ongoing support, LBUSD made the switch to Finalsite to solve the two major problems they previously faced:

First, they didn't assign website management to a single person. "In the past, we never had one individual who took ownership over the website," said Andy. "So there were always a lot of competing hands in the pot."

The result? Inconsistency in design, voice, and quality. So, when it came to redesign their website, LBUSD sought to hire someone to oversee the new website from start to finish.

"When we were looking for a new vendor, we wanted to go with a company that was going to be able to design us something current and modern," said Andy.

Part of that modern design was going responsive, because LBUSD sees an abundance of traffic from mobile devices. "Over half of our users were mobile," said Mike. "And when we saw that, we realized we needed to pay attention to them."

The first problem was easy to solve. LBUSD hired Andy to maintain the quality and consistency of the design across the board. The second problem? Not as easy. After months of research, LBUSD narrowed their new vendor choice down to three potential providers, including Finalsite.

"When we were looking at new solutions going forward, Finalsite stood out to us because of the design savviness and the features that are specific to districts," said Andy.

"While the price was slightly more than our other options, the end result is something that we are really happy with and makes it worth the extra expense."

Design was paramount in the decision-making process at LBUSD. "The choice to use Finalsite is part of our journey to be the best in the state," said Mike.

So how exactly do you go about planning and executing an award-winning website that represents your district's unique story? Turns out, it can be boiled down to a few key components.

First: Start with an Awesome Design

"Beyond everything, we wanted a modern and very sleek looking website," said Andy.

Ask for an awesome website from our team of award-winning designers, and an awesome you will receive. Complete with infographics, parallax scrolling, interactive hover effects and stunning panel design, Laguna Beach USD easily boasts one of the best district sites we've ever launched.

"We are looking to be the best in the state in a lot of areas, and web design is just one of the areas. And now, I think we have one of the best websites in the state," said Andy.

One of the most admirable traits of LBUSD's website is the seamless experience as you go from the homepage to one school website and to the next. "If you go to each of the elementary schools, the navigation is the same, but it has different information," said Mike. "It's really important to provide a great user experience, and the similarities between site pages does just that." 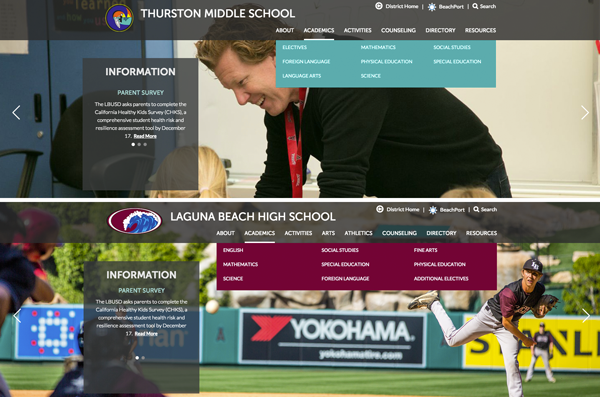 This type of simple UI is paramount for parents. Parents who have children in different schools know exactly where to go on each individual school website to find what they're looking for. And since the site is responsive, they can find it from any device with ease.

Beyond ease of navigation, LBUSD also put a strong focus on maintaining a specific look and feel. Visit the district's homepage, or any school page, and you'll notice each site has the same layout complemented by each individual school's branding,

"We wanted a really consistent model for our four district sites and our main school site: same parameters, same branding," said Andy. "And I think we did a great job achieving that."

"Beyond our design, the other thing that makes our page stand out are our photos and videos," said Andy. "I think the photos we use in our headers and the videos we feature on our front page tell a great story."

LBUSD has a design-savvy communications liaison that does an excellent job of selecting the photos for the site. "I think when you have really good quality photos that look good it really tells a better story," said Mike.

"We love athletics manager," said Mike. "We use almost every feature it offers because it makes it so easy to find a game and find the scores, especially compared to what we had before." 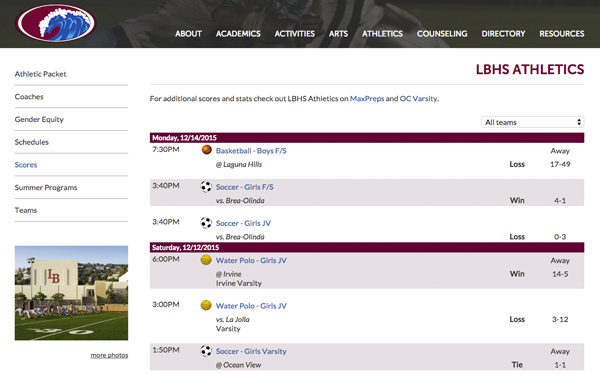 Fourth: Put guidelines in place to maintain it.

"I think a lot of districts like to put everything on the home page," said Mike. "It's a crutch. It's easy. It makes everyone happy. But this is one of the major problems we had with our old site."

On their old site, there was no consistent navigation between school sites; the UI changed from page to page; there were different fonts everywhere.

"It was just craziness," Mike summarized. "So this time around, we had Andy put plenty of guidelines in place to help us maintain a consistent look that our previous site lacked," said Mike.

And for Andy, there's no wiggle room. "I've had to tell some of our principals 'no' because we want it to maintain a certain look and feel," he said.

How nit-picky is LBUSD, exactly? Well, you won't find a news headline that's longer than two lines. All news posts have high quality pictures. And you surely won't find random items dropped into the homepage.

When LBUSD started their redesign last summer, they decided beforehand that they weren't going to do any training until everything was good to go.

Mike and Andy brought in key people who would be making updates and trained them on the Finalsite Platform to ensure everyone knew how to manage their sections of the site. "We had workshops where we would edit a page or post a news item together," explained Mike. "Then, we assigned website managers different pages from different schools to conduct peer review editing on each school's content."

But for LBUSD, it's not just about training how to update content. They also train on the standards for updating content.

During the design process, Andy worked with their Finalsite designer, Natalie, to set in stone the way each piece of content on the site could look.

"It's so important to follow the design requirements," said Andy.

"I will tell you there was push back and a little grumbling from time to time. But I like the simplicity, and more importantly, our parents and community are happy with the simplicity," said Mike.

Other Tips and Tricks for Your District Launch

Pick the Right Person: "I think that it is important to have the right person heading up the project who is meticulous and detail-oriented. It leads to the right company, the right design," said Andy.

Make sure that you have enough time: "Don't rush, even if you're anxious. It's important to not have incomplete items on any page, and to be sure everyone is trained," said Mike. "Getting the site done the right way is more important than some self-imposed deadline."