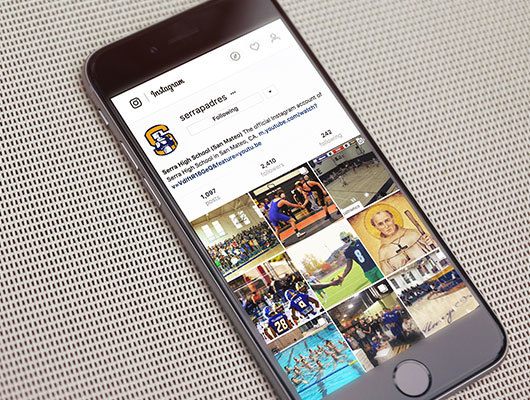 After surveying more than 300 school professionals, we found nearly 75% of schools are on at least four social media networks. So it goes without saying that even late adopters realize social media is a necessity. For Junípero Serra High School, an all-boys high school in San Mateo, California, their goal with social media was to showcase the school's well-rounded story — specifically one that extends beyond its well-known sports reputation. Being one of the first West Coast schools to work with Finalsite, since 2008, they've had the best tools and newest best practices shared year over year to not only build their website presence, but also their social media presence.

According to Sandy Brook, Director of Marketing at Junípero Serra High School, the school has been known as a sports powerhouse for a long time; not surprisingly, this often meant that other key components of the school's brand and story, such as the quality of the school's curriculum and other programs, get lost. By expanding its presence to multiple social media platforms over the past few years, the school is now able to share a more balanced digital story by strategically planning social media content, how it is shared, and on which platforms it should be shared. 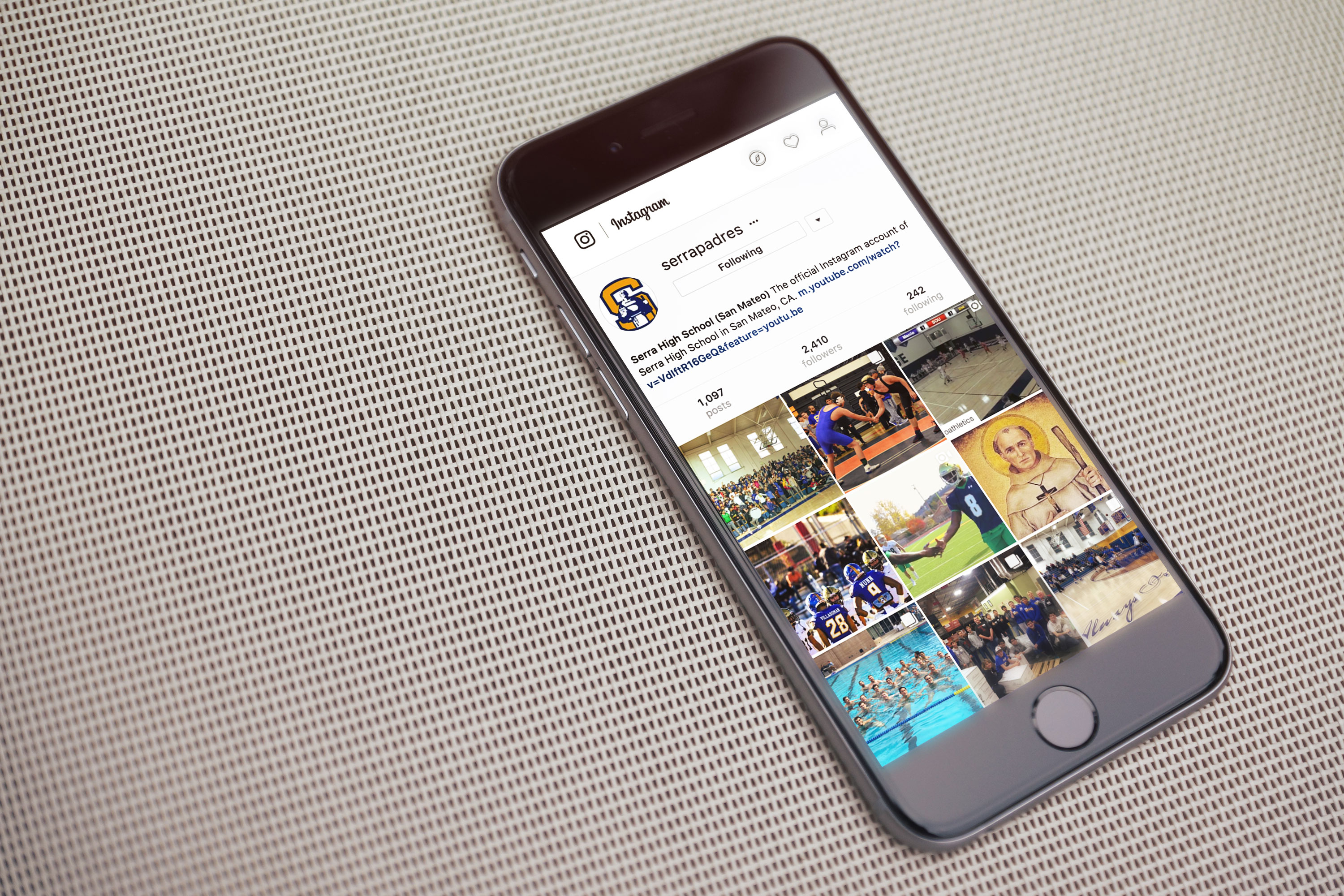 After attending one of our social media workshops earlier this fall, Jonathan Allen, the school's Assistant Director of Advancement: Communications, Digital Media and Grants, shared some of the big strides they've been making on the social media front. Jonathan stressed that they've been following the practice of something known as "edu-tainment:" sharing both educational and entertaining content on a regular basis to both engage and inform target audiences. "Edu-tainment" has been the school's fundamental strategy for sharing a more diverse story, increasing brand awareness, and engaging with its followers in a fun way on social media.

While the school has had a strong Facebook presence for more than seven years, and a presence on Instagram and Twitter for two years, the workshop sparked some new ideas that Jonathan wanted to see come to live in the 2017-18 school year. By focusing on creating engaging, high-quality content specifically for each network, the school has seen a significant impact on engagement.

Here's how they do it:

Everyone knows video content is important, as it is proven to have better engagement than other types of social media posts. Facebook (not YouTube!) is actually rated as the most impactful social channel for video — 8.4X higher than any other social channel. Plus, videos on Twitter drive 2.5X replies, 2.8X retweets, and 1.9X favorites than third party players. Video is popular on Instagram too — and of course, schools use it most commonly on their website. However, this doesn't mean you can use the exact same video in all of these places.

"We wanted to be as engaging with our community as possible using video," said Sandy. "This has worked well for us bringing authenticity to our messages, keeping them natural and personal, and sharing video on platforms like Facebook which offer CC (closed caption) on video so anyone can watch and interpret what is being shared."

"Syndication isn't a strategy" is something we say a lot when it comes to social media. In short, we mean that it isn't a best practice to take the same video (or photo, blog, etc) and post it in the exact same way across all networks. Rather, it's important to use different video for social than you would for your website. Social media video should be kept short, to the point, or direct your audience back to your website for a more informative, longer video. This is something Jonathan focuses on, and it's paying off.

For example, the school recently shared this short video compilation of highlights from one of their football games this season: 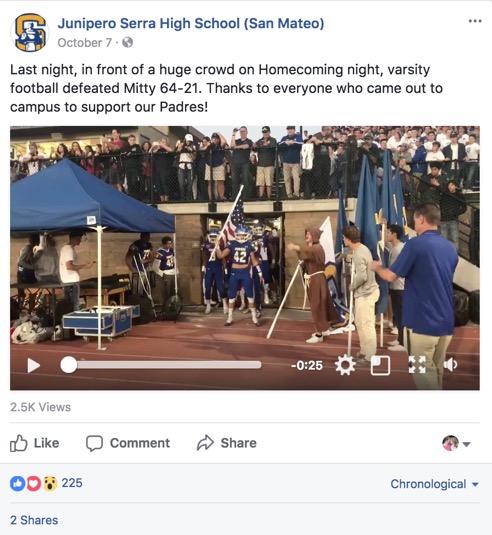 This is a short, 25-second video highlighted different parts of the school's football game. With over two hundred reactions, this is the perfect example of how original (yet simple!) video content can be engaging on your school social media.

The video content doesn't necessarily have to be your own, either. The school does a great job of sharing and re-posting video from other sources that is relevant to the school. For example, they recently retweeted a video post from the University of Notre Dame, whose football team practiced at Junípero Serra High School, which received many likes and retweets itself:

Jonathan also highlighted how they also recently starting doing more with live video, particularly on the school's Instagram profile. "We have used Instagram Live for big athletic events," said Jonathan. "Since there is limited streaming of our games available on the internet, I will start recording live video from our social media channel right from the sideline on my iPhone." Almost every social media platform, like Facebook, now offers a live video feature, so keep this in mind the next time your school hosts an event.

Jonathan will also take pictures and record short video clips to share after the games. He mentions how great it is to see comments live as he is recording the video and have this be another great opportunity to engage with followers during major events like sport games.

Another great aspect about the visual content on the school's social media channels is their use of professional photography and other tools to capture professional looking photos." We have two photographers contracted with the school that originally were hired for just print media," said Jonathan. "We've since started sharing their photos on social media to create interesting stories on Instagram, reaching nearly a thousand views at a time, Instagram slideshows, and Facebook galleries." 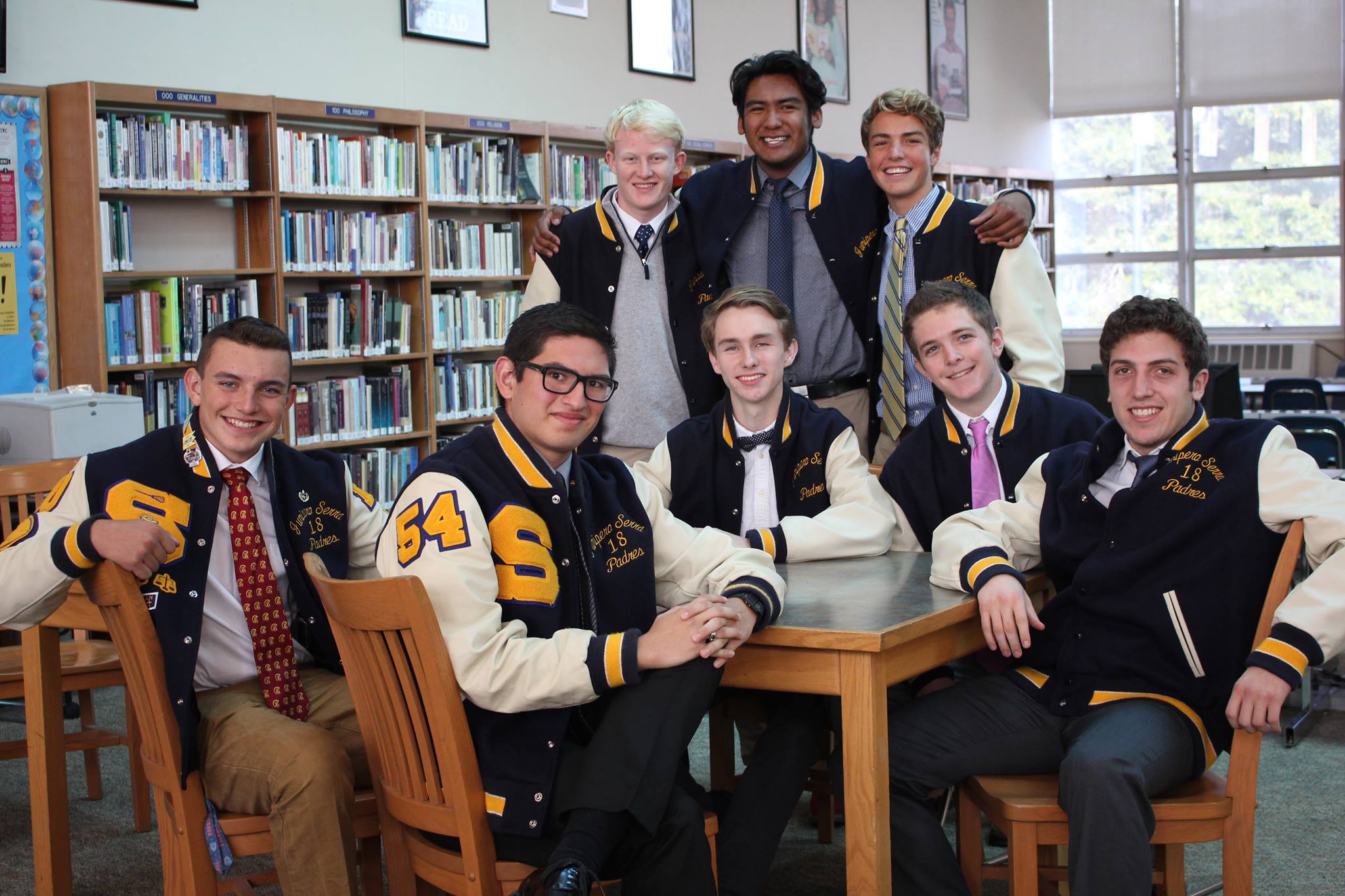 These photographers will attend events happening at the school and will send Jon the best photos right after the event to get published as soon as possible. This is extremely helpful for Jonathan when he cannot be at an event. "What's great about posting the photos immediately after the event is we are sharing everything the school is doing in real time," said Jonathan.

Not all photos shared on social media have to come from a professional photographer, however. Jonathan recently shared a new panoramic photo of the newly-branded gymnasium at the school. This post in particular reached nearly 450 likes:

The foundation of your school starts with your students, and for Junípero Serra High School, it's become a very important part of their social media strategy. Being a school with various celebrity alumni, such as Tom Brady, the students' stories are shared during their time at the school and beyond that. "We feature top students, especially when they get into exceptional colleges, to promote our academics," said Jonathan. "Seeing their own accomplishes and how the school presents itself has become easy to do on social media where people get a lot of their information these days."

Social media has now become a new avenue for the school to showcase its students, their achievements, and open a new dialogue with current students, parents, and even grandparents who are also on social media that are always willing to engage and share with these types of posts. 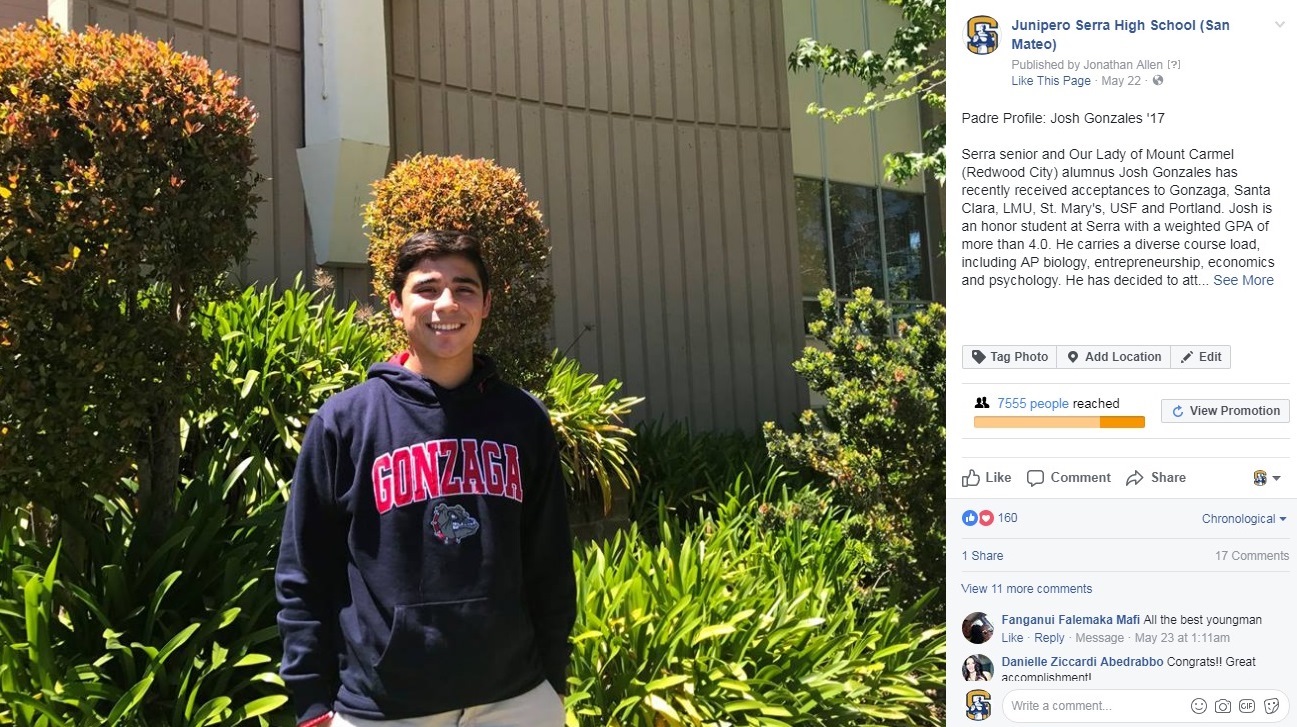 Student profiles are a big part of their strategy, because it gives them a platform to share the diversity of their students and their accomplishments beyond athletics. They even have a catchy title — Padre Profiles! Jonathan says he puts ad dollars behind this content on Facebook to expand its reach and get the word out about their excellent students: 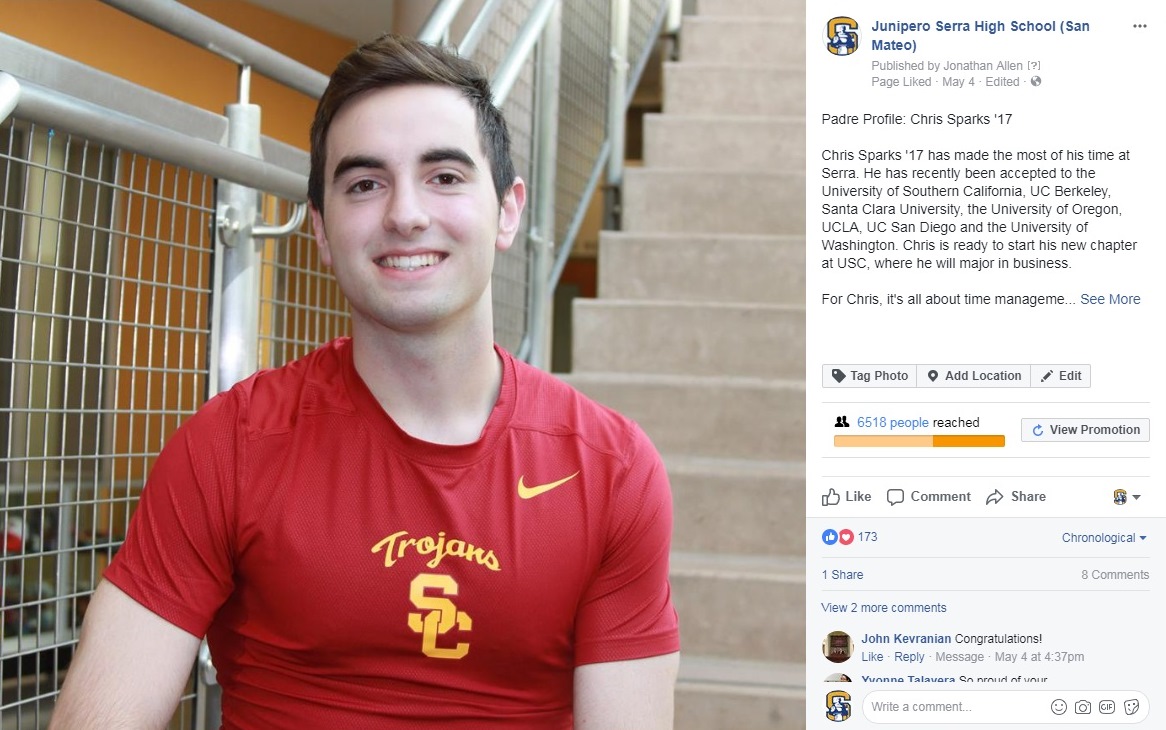 However, the storytelling does not have to stop once the students graduate. Highlighting what your alumni are also doing is a great way to showcase how influential your school's education impacted their career and future endeavors. Jonathan recently shared how he came across some archived media from one of their most famous alumni - The New England Patriots' quarterback Tom Brady.

"We posted a video featuring one our alumni, Tom Brady, doing an interview before his senior year in high school," said Jonathan. "Sports Illustrated, among others, picked it up and the video received almost one million views between Facebook and Twitter." 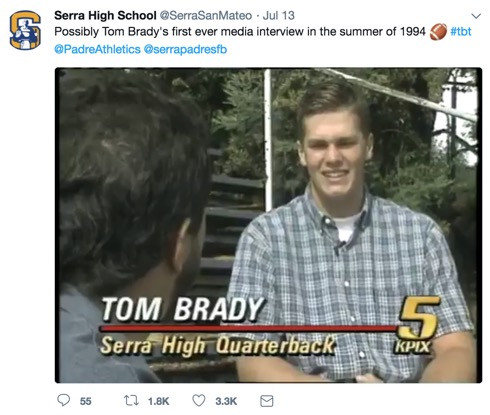 The perfect post for #tbt could also be in your school's archived media if you're able to access it.

Finally, the school has also handed off a lot of the social media creation to its students - the ones using social media day in and day out. For example, this drone video shared on Instagram over the summer was created by one of their students:

Sandy shared how giving this opportunity to the students is something that also sets them apart. "We're able to involve students who are interested in media, video, and more through social media as well," said Sandy. What better way to give a perspective of the school's story than from the students themselves.

They Created a Branded Campaign Around School Event

The school's 75th anniversary is coming up next year, so it was time to release a branded campaign on social media. The campaign is being promoted using the hashtag #Serra75

Antonia Ehlers, Director of Media and Public Relations, highlighted how they began promoting the campaign recently on social media. "We shared a tease video to start getting people to think about it," said Antonia. "This video in particular not only highlights our upcoming open house but uses the hashtag to promote the campaign as a whole." 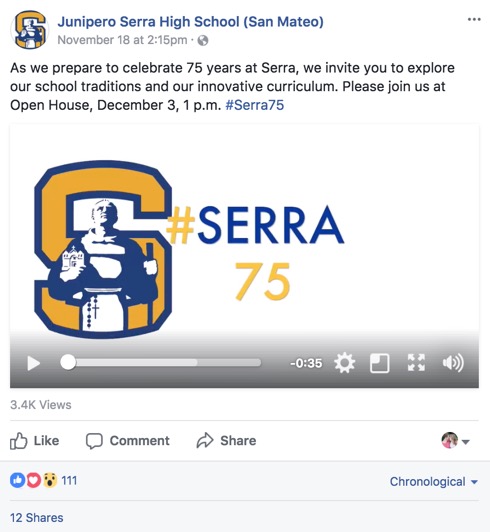 As part of promoting the event and the hashtag, the school continues to incorporate the hashtag in many of their social media posts to drive more engagement and awareness about the milestone: 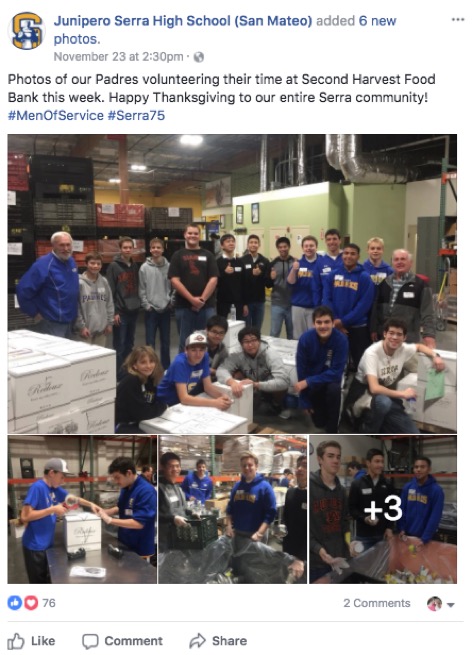 Every school's social media strategy is unique, but having it be influenced by your school's digital storytelling can make an impact on the kinds of post you are sharing as well as the engagement you hope to see. By incorporating different kinds of video and photos, to highlighting the students and other major events, Junípero Serra High School has built a solid social media presence with relevant and engaging content.

How do your marketing strategies compare? Want to be on our Featured Friday blogs? E-mail us at marketing@finalsite.com and share your success with social media, the Finalsite platform, admissions, crowdfunding, or content marketing! 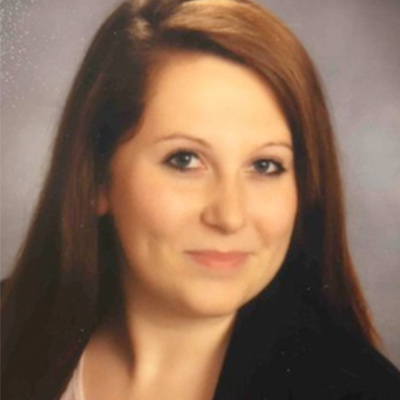 Stephanie brings a fresh new marketing perspective with her background in social media, communications, and radio broadcasting. She is a co-producer for the FinalsiteFM podcast network and is passionate about helping schools stay ahead of their marketing goals by tracking new trends and developments. She is also a practicing singer/songwriter and loves to expand her creativity in DIY projects.