“Hey, Siri - will voice search ever matter for schools?”

Let’s get a few things out of the way:

In short, the state of voice search for schools is chaos. But it won’t stay that way!

Look, Siri has no idea what the answer to my question is. But she’s trying to answer my question to the best of her ability, and there are smart people working every day to raise the ceiling on her ability.

As people get more and more accustomed to talking to their devices, there will be more of them built to listen all the time for the magic words that mean they are needed: “OK Google...”; “Hey Siri...” (Apple); “Alexa...” (Amazon).  And by the way, these are devices that don’t have a keyboard or any other way to accept complicated, language-based inputs.

Don’t even get me started on the prominence of voice options on devices that have a “keyboard”:

So we’ve got many signals that the biggest tech companies in the world are all in on helping you use your voice to get what you want from your devices. But let’s bring this back to schools.

Using the Amazon Tap that sits on our kitchen counter here in Somerset County, NJ, I just asked Alexa, “What are the best private schools around here?”  Her response was:

Here are a few ones:

You can ask me for more information about any of these such as phone numbers, hours, or address.

This is laughably bad. There are roughly ten New Jersey Association of Independent Schools member schools within 15 miles of where I’m sitting, but I would have been happy if any of the four results here were even schools.

As I poked around to try to unravel Amazon’s method for assembling this list, the only thread I could find was the fact that three of the four have a Yelp listing that shows up on Page 1 of a Google search for their brand name. There’s a good chance Amazon is leaning on Yelp quite a bit for these “give me a list of options” search types.

Now, imagine a young couple is driving around looking at houses in the town they’re moving to. They’ve heard that the local elementary schools aren’t great, and they drive past a high hedge and a sign that says “Something Country Day School.” The spouse who is driving says to the spouse who is not driving, “I wonder what the private school scene is around here.” The spouse who is not driving lifts the iPhone already in hand and says “Hey Siri: What are the best private schools around here?”

So maybe I shouldn’t have used Alexa to test the concept in this section but I’m on a deadline and this article is free to read so you get what you get and you don’t get upset.

What About Filling Job Openings?

OK, of all of these possibilities, this strains credulity the most — and I say that as a former independent school teacher (who went through the job search process a few times) and a current independent school parent. So I won’t say that, “Hey Siri - find me a teaching job,” is going to lead to your next great hire (and the Alexa and Siri results are bad, bad, bad right now), but I will note that Google has made a BIG commitment to the job hunt in general:

And we can expect this to feed into voice search...someday.

So I really thought this would be the best experience, since camps are usually pretty clearly named - “Mr. Smith’s Lacrosse Camp” - the thing you’re searching for is often right there in the business name. But I struck out with Siri four or five times (robotics camps, STEM camps, lacrosse camps, sleepaway camps, etc.) before hitting on:

Granted, that’s pretty far for a fashion camp, and maybe it really is the closest one (it’s not, trust me), but the panels of information I can swipe down to see are really useful for us to pay attention to:

This is all the stuff a school should expect to see popping up when voice search does get good at pulling up appropriate answers to “find me the best private school in Bethesda.” And the fact that it’s coming from Yelp is notable. Most schools don’t pay attention to Yelp, but Siri’s response here (see screenshots) is the second piece of evidence in this article that the big guys (Apple and Amazon in these cases) count on Yelp, and so your presence there matters.

Search success is an established necessity for schools. Here in the voice search game, it’s too early to tell what success is going to take, but we’re watching it evolve so that when the voice component becomes significant, we can be there to help you get the right “visibility.” (Get it? Sight vs. sound? Sigh, I tried.) 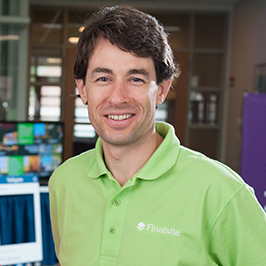 Red leads our team of experts who have your back when it comes to organic online searches and ads. With a long history in independent schools — as an alum, former teacher, dorm parent, coach, and now a current parent — his passion for helping you is rooted deep in his own experiences. Alongside his degree in engineering and a master's in school leadership, it's easy to see why clients say Red "gets them" when they discuss marketing strategy!