We know first-hand that your school's website is your most important marketing tool.

We also know it makes a lot of sense to be where your audience is – and today, one of the most important places to have a presence is on social media. Not only is this one of the first places to connect with prospective students and families, but it's also another avenue where schools can illustrate their stories, share updates, and make connections worth keeping. 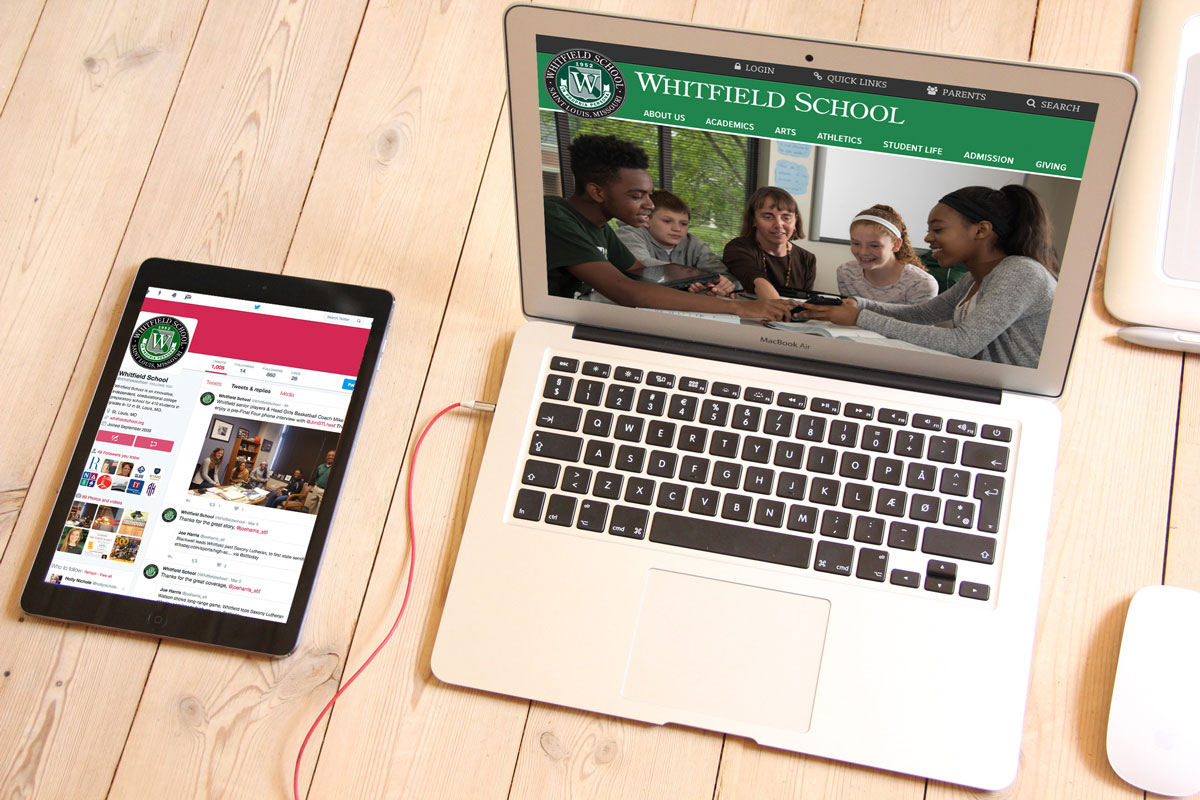 Whitfield cultivates ethical, confident, successful students in a community of innovation, collaboration and trust. Our school is a close-knit and diverse community for students in grades 6-12. Here, each student’s strengths are known, cultivated and celebrated. Our talented faculty capture students’ imaginations and energize them to identify and pursue their passions.ardent questioners.

Step 1: They asked the experts for help.

Whitfield School realized how important social media is to their school's success, which is why they reached out to Finalsite for a social media audit. Becky Marsh, Director of Communications and Marketing at Whitfield School, felt their partnership with Finalsite was valuable to their school community because of the expertise and knowledge our staff provides. As a one-person communication office, Becky wanted to leverage this expertise to improve Whitfield's social media presence and reach their targeted audiences more efficiently online. Becky shared just how influential this audit was and how it changed their social media marketing plan:

"The audit showed us a number of things we are doing well and shined a light on several opportunities for growth. More importantly, once the audit was complete the folks at Finalsite helped me develop an affordable and measurable strategy to address the opportunities for growth. When I presented our marketing and advertising strategy at a board meeting earlier this fall, our trustees and head of school responded with enthusiasm at the data-based decisions we are making as a result of the audit."

"Once the audit was complete, the folks at Finalsite helped me develop an affordable and measurable strategy to address the opportunities for growth. When I presented our marketing and advertising strategy at a board meeting earlier this fall, our trustees and head of school responded with enthusiasm at the data-based decisions we are making as a result of the audit."

Step 2: They built a new a strategy based on goals.

After discussing the idea of a stronger social media presence with the school's board and made room for social media ad spend, it was time to set a list of goals to work into their overall strategy. There were two main objectives they wanted to accomplish with their new social media marketing strategy (which came as an added marketing plan in addition to their SEO and PPC initiatives they were already working on with our consulting team):

Because Whitfield School is within a highly-competitive market in in the St. Louis area, it was important for Becky to define marketing goals that would differentiate their school and brand online within this market.

So how exactly does one differentiate themselves online? They consider the programs and qualities that truly set them apart — and one aspect that has set Whitfield apart from the rest is their College Counseling Program. 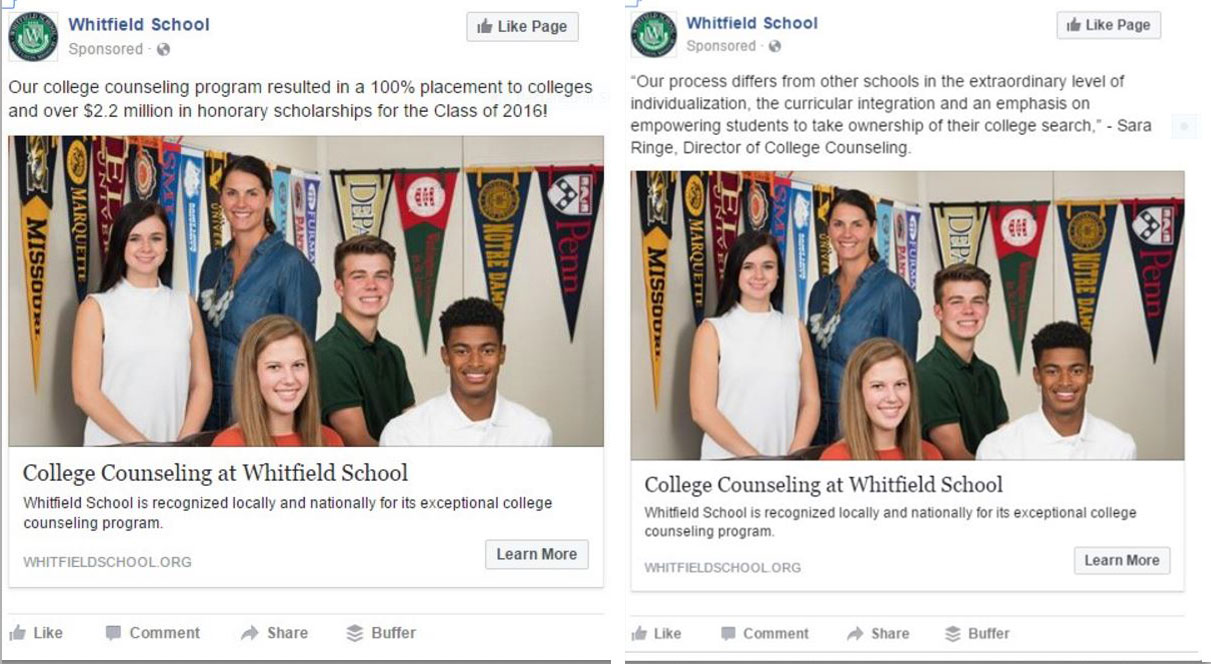 Becky evolved a social media strategy to help promote the program by following a simple process:

These ads gave their follows a preview of what this program has to offer on social media, and encouraged them to navigate back to the school website with more information — a strategy proven to increase website traffic. This social media campaign was so successful that not only traffic increased back to their website, but it also helped the school standout within such a competitive educational market.

Along with promoting the college counseling program, Becky worked on creative strategies with Whitfield's Director of Admission, Emily Chrysler. The duo worked together to meet admissions goals by selecting photos and editing content for the social campaigns. This collaborative effort not only saw success in their social media marketing, but also helped increase their website traffic with the most page views going to their admissions landing pages.

Step 3: They defined what worked, and continued doing it...only better

Not only was their College Counseling Program social campaign a success, but it also gave an opportunity for Becky and Emily to measure what they were doing on social media, track their visitors' activity, and engage with their followers in new ways. Social media has also become an important tool for admission goals. 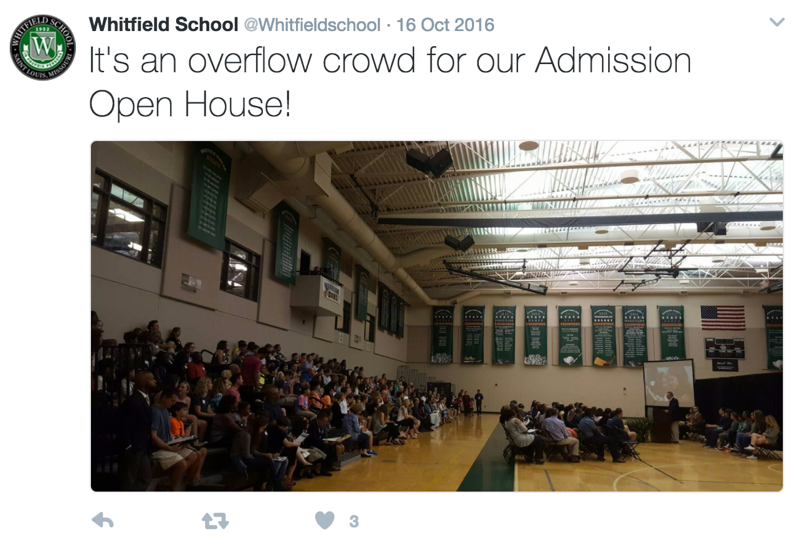 By also combining their SEO and PPC campaigns to track keywords and website traffic, Becky can build an integrated strategy for the type of content posted online. Since then, their followers have increased tremendously online.

We'll let the numbers speak for themselves from a six-month period:

And to think, it all started with a simple social media audit.

"Our social media audit produced the data I needed to move forward with several initiatives including launching a social media ad program that has produced AMAZING results so far this year," said Becky.

See for yourself how Finalsite's full suite of tools will save you time and improve your school's online presence!

Does your website make a good first impression? Get expert feedback on your school's website sent straight to your inbox!